I've had this desk for about 4 months now so it feels time for a write-up.

You don't have to look very hard to find people slating this desk which put me off buying it. There is a standing desk at work but I never tried it as I didn't want to use a laptop as that feels like it's negating the ergonomic/postural benefit of standing up. I think a number of the negative reviews relate to the motor. I didn't want to pay for a motorised version and as there is an Ikea nearby I could try out how manually raising & lowering felt. Given that you're going to want a standing desk as you feel you're not getting enough movement into your day then the effort of raising the desk is an added plus, I think.

So how long does it take?

It's not hard work and it takes about 57 seconds to raise it up to the level you can see below. I can't raise it much higher due to the book shelf but it's high enough for me.

Yes. I know that there is varying thoughts on whether it is a good idea to go from sitting all day to standing all day but I tend to stand up for maybe 5 hours. I find a side benefit is that I tend to move more anyway when it's raised. I think the point of the Standing Desk movement (if you can call it that ) wasn't to stand as such but to not be immobile. I think that is easier to remember to keep mobile when you are standing as it's not as comfy as sitting (if it is you need a new chair!)

Some reviews mentioned it would not take weight reliably. Well I have three monitors at about 6kg each and I often have a stack of dev books on there and when raising it and lowering it there is no problem that I've seen.

I also like that it is 80cm deep so that even with my monitor stand, which pushes the screens forward a little further than I'd like, I can get a 60cm gap between my eyes and the screen.

Here it is in the seating position... 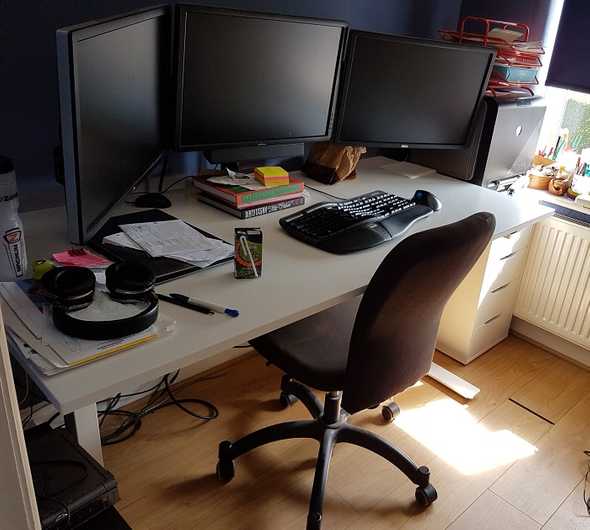 ...And some 57 seconds later in the standing position... 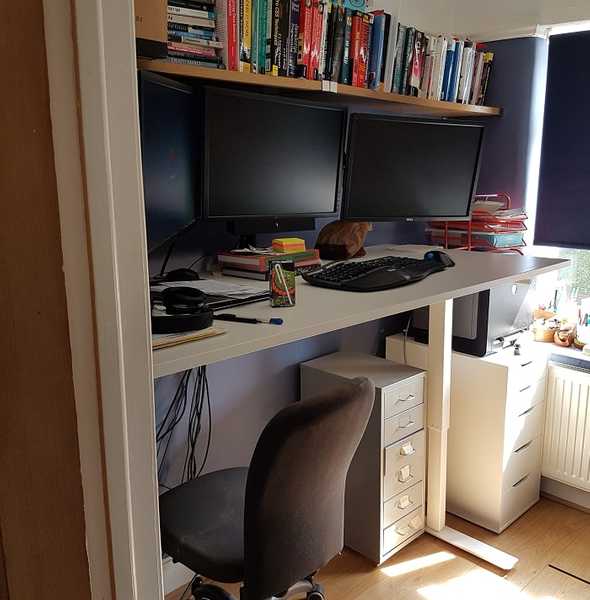